Here’s how you can pick one up:

A couple of days ago, Google announced the launch of the Pixel 4 and Pixel 4XL. We can confirm that Telstra will be launching these devices on the 24th of October 2019! Further details are below:

Please contact us to pre-order and secure one for yourself! Pre-orders close on the 24th of October 2019 so get in quick!

Get them while they’re hot!

Customers can pre-order now so be sure to let us know if you want one soon! Market launch is on the 24th so pre-orders cannot be placed after this date.

A vast abundance of information can be found on our phones. Specifically, they hold an inordinate amount of information about ourselves and the way we live our lives. From banking information, location data, eating and shopping habits, correspondence and, with the emergence of smartwear, even our heart rates are accessible on our phones. Some have even compared them to houses based on the detailed information they contain about us. A 2002 study actually found that when people were shown the rooms of other people who they had never met, they could accurately guess the personality traits of that person (all except neuroticism at least).

It begs the question of what a person may figure out about us if they were given access to our phones. For many of us the thought of this may be as scary, if not more so, than that of a stranger seeing the insides of our houses. This is somewhat unsurprising, based on the seemingly endless slew of news headlines highlighting the prevalence of cybercriminals taking peoples’ private information from phones, computers and cloud storage. It is a pretty clear message really, BE SCARED OF WHAT YOUR PHONE COULD DO, but maybe it should be about what your phone could be made to do. Afterall, smartphone safety would probably be a pretty confusing phrase in a world without hackers. This begs the question, how do you make sure your phone isn’t being made to do something you don’t want it to do?

Well firstly, you’ll never be able to make ‘sure’ of this. Any type of computer is made to be somehow accessible, and people are bound to misuse that access in some way. It’s like driving a car, or owning a house; sometimes cars crash, even when driven by the best drivers, and sometimes houses get broken into, despite having good security. Likewise, there is always a small possibility that your phone will be hacked, or data will be stolen. The trick is to minimise that likelihood, and if a piece of information is too sensitive, don’t keep it on your phone. Luckily, our IT support team have provided some pointers on how to keep your phone safe online. The following 5 pointers could save you a lot of trouble down the road, enjoy: The next generation of phones is here

The Next Generation of phones are finally here…

And they look stunning! That’s right ladies and gents, with the 2019 annual World Mobile Conference (MWC) it’s officially smartphone season! With this has come lots of revolutionary smartphones. The obligatory flagships of big brands, 5g capable phones, foldable phones (my personal favourites), and a phone with 5 cameras from Nokia. This article breaks down what we have got so far, and if I may say so myself, it’s exciting:

I know what you’re going to say. I really do. Yes, we do still remember the spying allegations made by the US and the traction they got. But for the love of god, look at this phone! What you’re looking at is the Huawei Mate X. With a 6.6-inch front screen display and a 6.3-inch screen inch one on the back, it folds out to an 8-inch display with a resolution that almost makes you want to cry (2480 x 2200). So it’s not as though it’s without its problems, with the screens always on the outside, you’ll probably scratch it within the first day unless handling it like a newborn. Huawei has built a case for it in all fairness, and just look at it. It also won’t lie completely flat as a tablet due to a curved panel that juts out from one edge which houses, among other things, the cameras. That is still a small price to pay, and it gets better.

This phone is 5g capable, and there is a 2-in-one power button and fingerprint scanner on the side. According to Huawei, they’ve been working on their patented foldy-bit (not the technical term I’m sure) for 3 years and it doesn’t have an annoying gap (like Samsung’s Galaxy Fold) due to an intricate design with over 100 components. It is also thinner than the Galaxy Fold, and much thinner when folded (11mm, to the Fold’s 17mm). It kind of looks like Huawei blew Samsung out of the water on this one.

If you want to multi-task, you can have 2 apps running side by side on the screen at the same time, that being said Samsung has 3. It has There’s a dual, 4,500 mAh battery with 55W fast charging and dual slots for SIM cards. It has only been seen on stage in the hands of Huawei CEO Richard Yu, but it looked slim, slick and durable from the way he was handling it. Samsung has done all they can to overshadow MWC this year with their unveilings at their Unpacked events in San Francisco and London not long before MWC. One may question the wisdom of this decision as they’ve been matched or out-done in everything they announced once MWC rolled around. Nonetheless, DJ Koh seems happy to be first-in and almost best dressed. A perfect example, the Samsung Galaxy Fold has solidified its place in history as the world’s first foldable smartphone. The flexible display is based on technology that has been in development as Samsung for over 10 years. The phone-tablet lichen is priced at €2,000 ($3,172.67 Australian) and features an unimpressive 4.6-inch display at the front. The inside, however, folds out to reveal an impressive 7.3-inch AMOLED display. It also has the benefit of coming from (matter of opinion) a more trustworthy company that Huawei.

Another notable mention is the Galaxy s10 series. They are available for pre-order not and are set to be released on March 8th. The series includes the 6.1-inch Galaxy, it’s big brother the 6.4 inch s10 Plus, and the proverbial runt of the litter 5.8-inch s10E.

Click here to go back to Home: nbn compatible phone systems and more! The next Android update comes later 2017. Android O is the next coming version of Google’s mega-popular mobile operating system set to release this year.

This big Android update for 2017 will continue its beta following the Google IO 2017 presentation and will likely debut in full first on the Google Pixel 2.

Don’t have a Google-branded phone? The company announced Project Treble, an initiative that will ensure that Android O comes to many more devices than previous operating system updates.

Speedy boot times are usually associated with a step-up in hardware – Google unveiled that Android O will bring those benefits to all phones that run the software.

It’s not just the operating system that becomes faster to load up, but the apps on your phone too.

This is a power-saving feature that de-prioritizes app functions running in the background, which in turn means that your battery is going to possibly last much longer than it currently does on Android Nougat.

Paired with likely improvements to the Doze function that intelligently saves battery during down-time, it’s feasible that Android O could help squeeze an extra few hours out of your phone battery life from fully charged to depleted. The DeX Station is compact, light weight and portable. It supports USB, HDMI and Ethernet connections, and acts as a charging station to make sure your phone can keep going as long as you do.

A full desktop at your command.

Some things are just easier on a desktop, like sending an email, bolding text or copying and pasting between apps. With Samsung DeX, you can do it with the click of a mouse or the punch of a key.

Samsung DeX lets you get the most out of your apps by letting you use desktop functions with them, such as right-click and drag and drop. So now you can do more things with the same emails, photos and files already on your phone. Get the new Galaxy S8 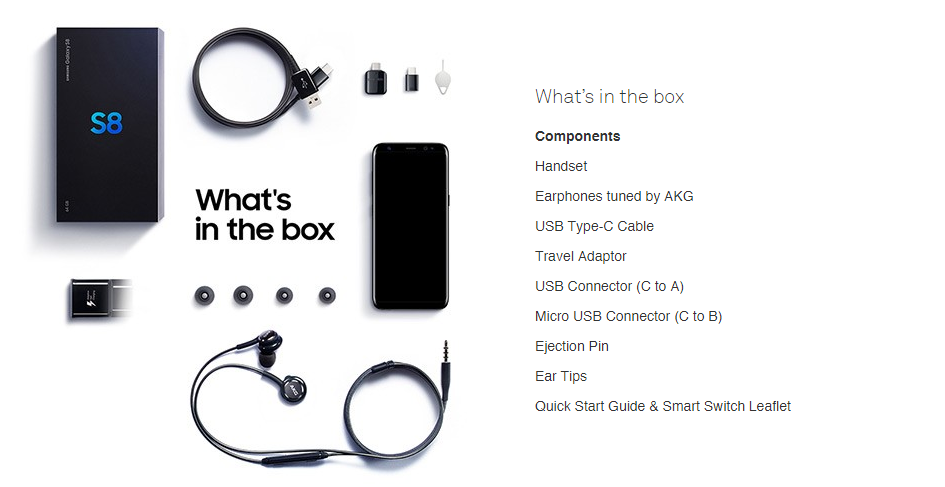